YORK, PA. – April 7, 2014 – Engineering Specifications for the air-cooled and water-cooled VertiCool Aurora units are now available at www.unitedcoolair.com/aurora. The VertiCool Aurora is a vertical floor mounted system available from 3 to 35 tons. Please visit www.unitedcoolair.com/distributor to find a distributor near you. United CoolAir products offer a wide diversity and flexibility that, when specified, will help to distance your offering from thecompetition.

For the past 25 years, United CoolAir has been manufacturing a broad line of air conditioning systems that include horizontal ceiling mount, several styles of vertical systems, outside air systems, and VAV units. They also manufacture a full line of portable air conditioners and heating systems for the rental and temporary cooling industry. For more information about United CoolAir Corporation or their engineering specifications, please call 717-843-4311 or visit www.unitedcoolair.com.

Two of Therm~Air’s portable systems were showcased at the 2014 CAT Rental Power Product Fair on March 31 in Dallas, TX. Attendees were able to get a hands-on look at the narrow 5 ton portable heat pump and the 25 ton portable air conditioning system with dehumidification capability. United CoolAir is a leading original equipment manufacturer (OEM) of portable air conditioning and heating units. In 1988, the company began manufacturing air conditioning equipment for stringent military applications and highly specialized mobile and portable HVAC systems. Presently, a variety of prominent brand names and rental companies market their portable products. In addition, the company manufactures a broad line of commercial indoor packaged and splittable air conditioning units marketed by independent distributors under the United CoolAir brand. For more information about the company or its portable products, please call #717-843-4311 or visit www.unitedcoolair.com/portable-products.

YORK, PA. March 4, 2014 – Engineering Specifications for the air-cooled and water-cooled C13-Series units are now available at www.unitedcoolair.com/engineering-guide-specs/.
The C13-Series is a high-efficiency horizontal ducted system that is splittable and available in the 2 to 8 tonnage range.  To find a distributor near you, please visit www.unitedcoolair.com/find-local-distributor.

For the past 25 years, United CoolAir has been manufacturing a broad line of air conditioning systems that include horizontal ceiling mount, several styles of vertical systems, outside air systems, and VAV units.  They also manufacture a full line of portable air conditioners and heating systems for the rental and temporary cooling industry. For more information about United CoolAir Corporation or their engineering specifications, please call 717-843-4311 or visit www.unitedcoolair.com.

YORK, Pa. – March, 2013 – United CoolAir Corporation (UCA) is repositioning itself to stand out in the high-growth retrofit air conditioning marketplace by adding the new tagline “All-Indoor Solutions,” which calls specific attention to the fact that all UCA equipment mounts entirely indoors, requiring no roof or pad space. UCA manufactures a wide range of equipment styles for practically any retrofit application. With the aging of many buildings, especially in urban areas, older systems need replacement by more capable units that meet the new efficiency standards. Many of these old units were installed at the time of the building’s construction, making them difficult to replace. “A high proportion of the multi-story buildings in cities like New York City, Boston and Chicago have floor-by-floor air conditioning systems that are difficult to access. The problem is not getting the old system out but rather getting the replacement system in at a reasonable cost. In most metropolitan buildings, there is no available space for exterior condensing or rooftop unit mounting,” said Neil Tucker, President of United CoolAir. Tucker remarked that often owners, contractors, and even some consulting engineers tend to focus on equipment cost rather than the Total Installed Cost. When you include the additional charges for special permits, crane rental, rigging, building modifications, equipment modifications and the labor to make these changes, the new HVAC equipment cost can be a small fraction of the entire project.

New York City is certainly renowned for the quantity and variety of tall buildings towering over the Manhattan skyline. Many of these structures are at a point where age has taken its toll on mechanical systems and now require replacement. Even if they are still operational, today’s new air conditioning systems are more energy efficient, making it cost effective for change-out.
You might not think this is a big deal beause it’s done every day but New York City, like many large metropolitan areas, is a little bit different from a smaller city like say White Plains, NY where mechanical systems are generally easier to access. In New York City, replacing a large system often requires demolition, cranes, rigging and a lot of extra work.
We were hired for a project at an EmblemHealth facility located in mid Manhattan around 35th and 7th avenue. The building was erected in the early 1970’s and the mechanical systems have been running for over 25 years. Since it is a hospital, maintaining ideal comfort conditions is critical. The air conditioning system had to be replaced quickly and with the least amount of disruption to the patients, service providers and staff. Like many tall buildings, space conditioning is done floor by floor rather than large central units. Many of the systems were installed during the building construction where access was not an issue. Removing the old systems is generally not a problem because the units are disassemble by whatever means available and scrapped. Getting the new units to their installation location is where the fun begins.

The EmblemHealth building had four existing units spread out from the basement, main floor and at an upper level. Sizes ranged to 45 tons and the replacement units would be the same size. MWSK Equipment is a manufacturer’s rep located on 7th Avenue in lower Manhattan. They service the five boroughs and have had a lot of experience in squeezing air conditioning systems into tall structures.
“Often the HVAC contractor has to do a lot of preparation work in order to fit an A/C system through small passageways. Larger units may have to be raised by crane to upper floors and require rigging, permits and building modification. If they take it through the building, the unit may have to be delivered partially disassemble and reassembled on site, or walls and doorways opened to allow access,”said Freddie Taruc, Sales Manager at MWSK. Regardless of the entry method, the installation cost can easily exceed the unit’s cost when you measure man hours and special equipment necessary to complete the job. And of course there’s the additional time needed for demolition, installation and final repairs.

Taruc said they needed to get the replacement units in quickly and with as little building modification as possible. They naturally selected their best candidate for the job—United CoolAir. “United CoolAir makes cooling equipment uniquely designed for our market. They manufacture a class of air conditioners with many flexible features that not only allow negotiation through narrow doorways and halls but also require no evacuation and charging after installation,” said Taruc. Tareq Batarseh, PE, LEED AP Associate for Robert Derector Associates Consulting Engineers (RDA) is the specifying engineer for the latest EmblemHealth project and is no stranger to these kinds of retrofit installations. “Each room has its challenges, some rooms have height restrictions and width restrictions,” said Batarseh. “United CoolAir units have the ability to connect to existing piping and ductwork with minimal modifications”. He likes the flexibility in United CoolAir’s system design and their ability to modify the cabinet sizes as needed, two major reasons why they are an approved manufacturer for EmblemHealth.

Unlike most commercial buildings, Healthcare facilities are generally active 24 hours each day. The retrofit was scheduled for two weekends with two units replaced each weekend. John McBride, Design Engineer for JFK & M Consulting Group made sure the replacement work would not interrupt the facility’s busy weekend schedule.“The old equipment was removed on a Friday and the replacement units were brought in with minimal interference with the hospital’s operations. The modular sections were quickly reassembled and connected to the existing hookups. Since the units were pre-charged at the factory, brazing, evacuation and charging in the field were eliminated saving many hours of valuable labor. The units were operational by Monday morning at the start of the new week,” said McBride. This latest installation went smoothly much to the credit of the easily-handling modular units, resealable refrigerant connections and factory charged sections. This came as no surprise to Joe Ptak, Chief Building Engineer for EmblemHealth, who was first introduced to United CoolAir air conditioning systems. They installed the first units in his building and have not looked back since. “I was very pleased with the performance of their units then and I recommended using United CoolAir systems for all the other EmblemHealth mechanical system replacements,” said Ptak. He said they have other facilities ready for the same treatment in the near future. 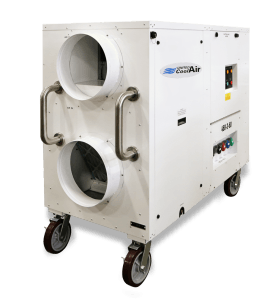 The unit has been designed around the tough rental duty requirements that United CoolAir units are known for. This unit will provide many years of performance and thus provide you with an excellent return on investment. The unit employs a powder coated, heavy duty steel cabinet sitting on swivel / lockable casters along with a single scroll compressor. The unit comes factory charged with an environmentally friendly refrigerant. The removable duct collars are 14″ (one supply, one return).  Also, there is a 14″ ductable condenser discharge available for indoor use. Standard power connection would be with color coded CamLock connections. The control panel requires a tool to gain access.

Designed to fit through a standard 36″ door opening, the PACH5N allows for increased tonnage and static pressure in places never thought obtainable with a 5-ton unit. The PACH5N delivers over 2,000 CFM at 1.5″ on Evaporator, 1.0″ on Condenser of External Static Pressure on both the evaporator and condenser allowing longer duct runs. The PACH5N was designed with the rental/ temporary industry in mind with 8″ Casters for easy mobility on any job site. The Low profile design provides easy maneuverability. As with all UCA portable products, the PACH5N is rated for both indoor and outdoor applications.

As with all Therm-Air units, the features and options can be tailored to meet your specific requirements. Contact the factory at 717-843-4311 for details and pricing.